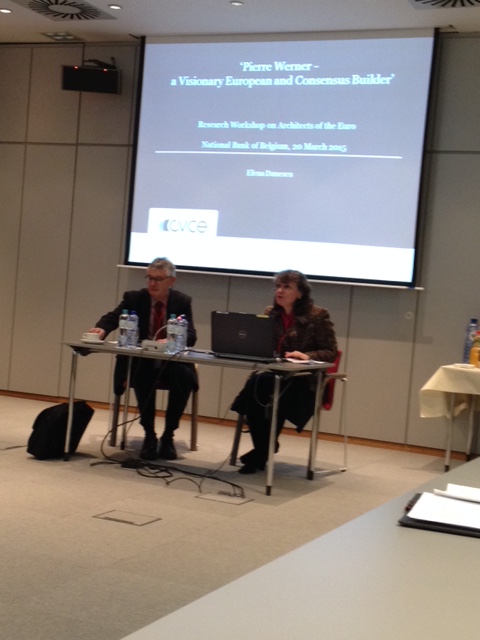 From 19 to 21 March 2015, the National Bank of Belgium hosted the ‘Architects of the euro’ workshop. This workshop will serve as the basis for an academic publication by the British Academy, due to be released in 2016 by the prestigious publisher Oxford University Press, entitled ‘Architects of the euro: Intellectuals and policy makers in the making of Economic and Monetary Union’. The publication, edited by Professors Kenneth Dyson and Ivo Maes, will be peer reviewed by a committee composed of Professors Charles Goodhart (London School of Economics), Harold James (Princeton University) and Hanspeter Scheller (European Central Bank).

Elena Danescu, PhD in Economics and Researcher at the CVCE, is responsible for the chapter on Pierre Werner’s achievements. Her contribution, entitled ‘Pierre Werner: A visionary European and consensus builder’, is based on an exploration of Werner’s archives, which have been opened for first time for research purposes and to which the CVCE has been given exclusive access.