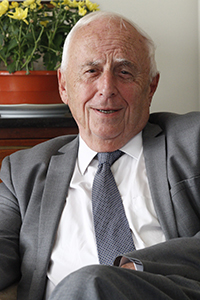 The interview with Francis Gutmann, conducted by the CVCE on 10 September 2014 in Paris, has just been published in the ‘Oral history’ section of the CVCE website.

Francis Gutmann served as Policy Officer in the Directorate of Economic and Financial Affairs (Economic Cooperation) at the French Foreign Ministry from 1955 to 1957, member of the French delegation to the Brussels Conference on the Common Market from 1956 to 1957, Secretary-General of the French Ministry of External Relations from 1981 to 1985 and French Ambassador to Madrid from 1985 to 1988, Chairman of Gaz de France from 1988 to 1993 and Chairman of the French Institute of Petroleum from 1993 to 1995.

The interview particularly focuses on the following subjects:

France and the revival of the European integration process

Spain’s accession to the European Communities from a French viewpoint

The establishment of WEU and its relationship with NATO

The nuclear question and the Euromissiles crisis

An evaluation of WEU’s achievements