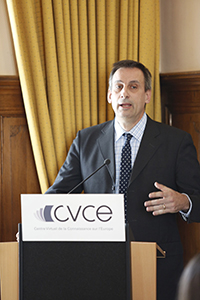 On 23 March 2015, Paolo Tedeschi, Assistant Professor in Economic History in the Department of Economics, Management and Statistics at the University of Milano-Bicocca and Visiting Researcher at the CVCE, gave a lecture entitled ‘A new European currency — a tool to strengthen or destroy the European Union? The consequences of an ill-informed public’.

When EMU and the ECB were set up, the European institutions failed to inform the citizens of Europe of the ‘rules’ related to the use of the new common currency.

These ‘rules’ have emerged over the course of monetary history and were particularly evident during the debates and discussions concerning the introduction of the euro. They indicate, for example, that a monetary union can only be successful if the real aim of the countries that adopt the currency is to strengthen political union and if there is a strong central bank with the power to intervene on the financial markets and significant supervisory powers over the EMU financial institutions.

Based on his analysis of Pierre Werner’s family archives during his research period at the CVCE, Professor Paolo Tedeschi will provide new insights into the creation of the euro and the functioning of Economic and Monetary Union as a case study of public misinformation.

The video of this lecture can be viewed here.