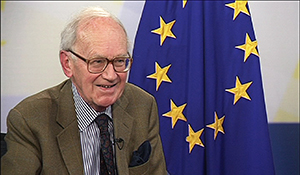 Baron Alexandre Lamfalussy passed away on Saturday 9 May 2015 at the age of 86.

Alexandre Lamfalussy was born on 26 April 1929 in Kapuvár, Hungary, before leaving his native country aged 19 and settling in Belgium. He excelled as a student of economics at the Universities of Leuven and Oxford.

After receiving a PhD in Economics, he began his financial career, initially at the Banque de Bruxelles, where he served as a member of the Executive Board from 1955 to 1972 and Chairman from 1972 to 1975. He was Head of the Monetary and Economic Department of the Bank for International Settlements (BIS) from 1976 to 1985, Assistant General Manager of the BIS from 1981 to 1985 and General Manager of the BIS from 1985 to 1993. This staunch supporter of European integration participated in the work of the Delors Committee on monetary union, then became the first President of the European Monetary Institute (EMI) from 1994 to 1997. In this capacity, he played a decisive role in the establishment of the European Central Bank. In 2000, the European Council appointed Alexandre Lamfalussy as Chairman of the ‘Committee of Wise Men’ for the regulation of the European securities markets. The proposals that comprised the ‘Lamfalussy process’ were adopted in 2003, laying the foundations for a new regulatory framework for the financial services industry. Alexandre Lamfalussy was Honorary Chairman of the Robert Triffin International association.

The book Alexandre Lamfalussy, le sage de l’euro, published in 2014 by Christophe Lamfalussy, Ivo Maes and Sabine Peters, contains a series of previously unpublished interviews in which the eminent banker describes the little-known role played by the BIS in safeguarding financial stability and gives his views on the euro crisis.