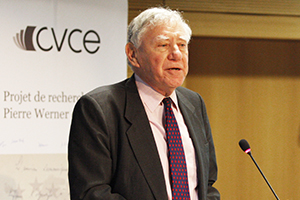 On 20 May 2015, in connection with the ‘Pierre Werner and Europe’ research project and the Oral history of European integration programme, the CVCE will be conducting an interview with Sir Brian Unwin.

Sir Brian served as a diplomat and senior official in the British Treasury, and for many years was responsible for financial relations between the United Kingdom and the European Union. He worked closely with former Prime Minister Margaret Thatcher and coordinated the issue of the British Government’s claims regarding its contribution to the Community budget; he was one of the key players at the Fontainebleau Summit in 1984. In the latter part of his career, Sir Brian served as President of the European Investment Bank, where he was involved in extending the bank’s funding programmes to the countries of Eastern Europe in the run-up to the EU enlargement, and in developing the Euro-Mediterranean Partnership and the ‘Investing in Peace’ initiative in the Middle East.

The interview with Sir Brian will be published at www.cvce.eu.