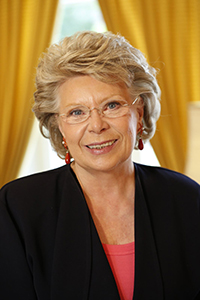 On 22 May, Viviane Reding, a Member of the European Parliament, was invited to the CVCE to give an interview in connection with both the ‘Pierre Werner and Europe’ research project and the project for the Luxembourg Presidency of the Council of the European Union in the second half of 2015.