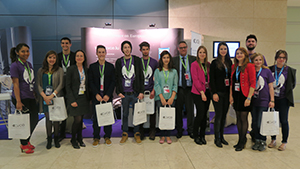 On 19 May 2015, the CVCE awarded a prize to the winner of the competition organised in connection with the European project SMILE, Sharing Messina Ideal a Lesson for all Europe, which was set up to mark the 60th anniversary of the Messina Conference in June 1955.

The idea of the competition was for young people to create a multimedia product summing up their vision of the Europe of tomorrow and their suggestions on how to revive the European ideal. This opportunity to reflect on the question of Europe was part of a more general effort to promote European citizenship education.

The SMILE project, funded by the European Commission under the ‘Europe for Citizens’ programme, was launched by the Italian Council of the European Movement (CIME) and involved the Centre Virtuel de la Connaissance sur l’Europe (Luxembourg), the Jean Monnet Association (France), the Konrad Adenauer Foundation (Germany) and the town of Messina (Italy).