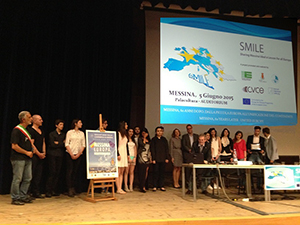 From 3 to 6 June 2015, the CVCE and its partners in the European project SMILE — ‘Sharing Messina Ideal a Lesson for all Europe’ were involved in the conference to mark the 60th anniversary of the 1955 Messina Conference: ‘Messina — Europa — Mediterraneo’.

On 5 June, following a session in which experts and researchers explored the historical context with presentations on the role played by the six ECSC Member States in the 1955 conference, the young winners of the SMILE competition presented their multimedia projects on their vision of the Europe of tomorrow and shared their thoughts on how to revive the European idea.

A series of events and activities were held in Messina to mark the anniversary of the 1955 conference. At the closing ceremony in the flag room at the Palazzo Zanca, following the conclusions of the conference and speeches by Italian authorities, there was a reading of the ‘Call of Messina’ of 6 June 2015.

The SMILE project, funded by the European Commission under the ‘Europe for Citizens’ programme, was launched by the Italian Council of the European Movement (CIME) and involved the Centre Virtuel de la Connaissance sur l’Europe (Luxembourg), the Jean Monnet Association (France), the Konrad Adenauer Foundation (Germany) and the town of Messina (Italy). A further conference is due to be held in Brussels in autumn 2015.

The program is available here.