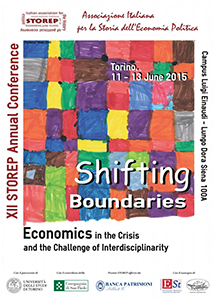 From 11 to 13 June 2015, the University of Turin hosted the 12th Annual Conference of the Italian Association for the History of Political Economy (STOREP). The theme of this prestigious academic event was ‘Shifting Boundaries: Economics in the Crisis and the Challenge of Interdisciplinarity’. It was attended by 150 researchers, professors and university lecturers from Europe, the United States, China and Japan. They presented their research and discussed the challenges of interdisciplinarity for research into the history of thought and for its theoretical and doctrinal apparatus.

Dr Elena Danescu, a researcher at the CVCE and director of the ‘Pierre Werner and Europe’ project, participated in this conference with her paper ‘Pierre Werner: A Visionary European and Consensus Builder’, which she presented during the panel ‘Architects of the Euro: Intellectuals as Policy Makers in the EMU Process’.