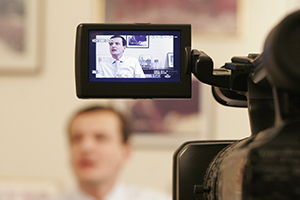 To coincide with the Luxembourg Presidency of the Council of the European Union, the CVCE has recently published a series of interviews with former Luxembourg ambassadors in which they speak about the milestones in their diplomatic careers and the development of Luxembourg diplomacy within the European Union. Three new oral accounts are now available in the ‘Oral history of European integration’ collection.

Pierre Pescatore was a mainstay of the Luxembourg Foreign Ministry after the Second World War, where he served as Legal Adviser, Director and subsequently Secretary-General with the rank of Minister Plenipotentiary (1950–1967). He also pursued an academic career, holding the posts of lecturer (1952) and professor (1963–1982) for the course on European Community law at the Law Faculty of the University of Liège. In 1967, he was appointed as a Judge at the Court of Justice of the European Communities, a post he held for three successive terms until 1985.

Paul Mertz served as Deputy Director from 1970 to 1976 and Director from 1976 to 1981 of the Political Affairs Directorate of the Luxembourg Foreign Ministry, Luxembourg Ambassador to Rome for Italy and Greece from 1981 to 1988, General Secretary of the Foreign Ministry from 1988 to 1991, and Luxembourg Ambassador to Paris for France and Permanent Representative to the Organisation for Economic Cooperation and Development (OECD) and to the United Nations Educational, Scientific and Cultural Organisation (UNESCO) from 1991 to 1998.