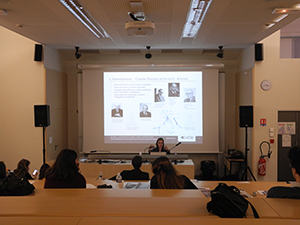 On 9 October in Blois, Henriette Heimbach presented the CVCE’s pilot project entitled ‘A new reading of primary sources via the digital analysis of social networks. The Werner Committee and the debates on European economic and monetary integration’ at the ‘Historians and digital technologies’ study day organised by the Humanistica association. The presentation of this joint project, which was co-produced with Elena Danescu, Marten Düring and Daniele Guido, was part of the ‘Rendez-vous de l’histoire’ event in Blois, France.

The project, based on a selection of documentary resources taken from the ‘Pierre Werner and Europe’ research project, was selected by the Humanistica panel because of the close link it established between humanities and digital tools. The aim of the project was to analyse the relationships between the members of the committee chaired by Pierre Werner so as to shed new light on their changing views with regard to the stage-by-stage plan for an economic and monetary union. Digital social network analysis methods were used to examine and visualise the negotiations that took place within the Werner Committee. This approach added a new dimension to results obtained using traditional research methods, while also pinpointing new avenues for research.

Following the presentation of all the projects, a round table was held in which the participants discussed the epistemological questions raised by the use of digital tools in these research projects.