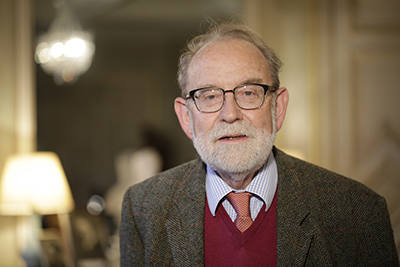 In connection with the ‘Pierre Werner and Europe’ research project and the ‘Oral history of European integration’ programme, Professor Bernard Snoy et d’Oppuers, President of the European League for Economic Cooperation and President of Robert Triffin International, granted an interview to the CVCE on 23 October.

Professor Snoy et d’Oppuers discussed the origins of his family’s European commitment and the achievements of his father, Count Jean-Charles Snoy et d’Oppuers (2 July 1907–17 May 1991), an eminent Belgian politician and signatory of the Treaty of Rome (1957) who was closely involved in the reflections on monetary Europe at the time of the Werner Report in 1970. Professor Snoy et d’Oppuers then spoke about his own career, the major European and international events he witnessed or took part in, his long-standing work for the reform of the International Monetary System — in which Robert Triffin International is closely involved — and the current challenges and prospects for Economic and Monetary Union.

The interview will soon be available in the ‘Oral history’ section of CVCE.eu.