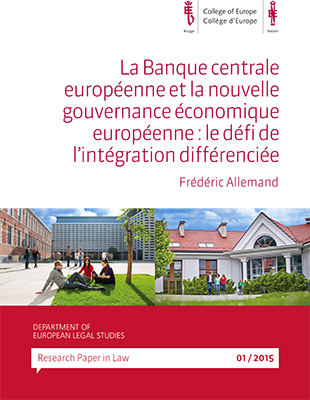 The European Legal Studies Department at the College of Europe has recently published a new issue of its ‘Cahiers juridiques’ featuring an article by Frédéric Allemand, European Studies Coordinator at the CVCE, entitled ‘The European Central Bank and the new European economic governance: the challenge of differentiated integration’.

Since 2010, governance in the euro zone has undergone major changes. There have been significant developments in the tasks and duties of the European Central Bank: the ECB is involved in evaluating the plans to aid Member States experiencing financial difficulties, it acts as a fiscal agent for the Member States and it performs prudential supervision for the major banking groups in the euro zone. These developments raise a series of legal questions. Frédéric Allemand particularly emphasises the difficulties that arise as a result of the discrepancy between the traditional sphere of activity of the ECB, the euro zone, and its new areas of intervention either outside the EU or within the EU but outside the euro zone. This new economic governance is raising more questions than ever before as to the constitutional and legal position of the European Central Bank in an environment characterised by integration on several levels and at several speeds.