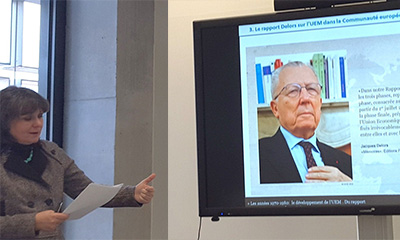 On 16 and 23 November 2015, Dr Elena Danescu, a researcher at the CVCE, led a joint seminar for the Master’s in Contemporary European History and the Master’s in European Governance at the University of Luxembourg on Economic and Monetary Union.

The documents used to illustrate this seminar came from the multimedia resources in the CVCE.eu research infrastructure, in particular from the previously unpublished archives of the Werner family, to which the CVCE has been given exclusive access in connection with its ‘Pierre Werner and Europe’ research project.