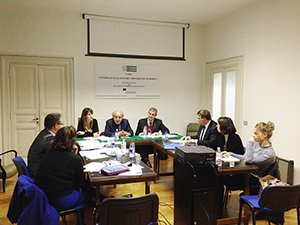 60 years after the Messina Conference: the importance of recalling the ideals and lessons of the European integration process.

On 15 and 16 January 2015, Susana Muñoz, Head of European Integration Studies at the CVCE, and Marco Gabellini, Scientific Collaborator, attended the launch meeting of the S.M.I.L.E. project. S.M.I.L.E. — Sharing Messina Ideal a Lesson for all Europe — is a European partnership supported by the European Commission's ‘Europe for Citizens' Programme. This cooperation project launched by the Italian Council of the European Movement (CIME) involves the Jean Monnet Association (France), the Centre Virtuel de la Connaissance sur l'Europe (Luxembourg), the Konrad Adenauer Foundation (Germany) and the town of Messina (Italy). In connection with the project, a series of events and activities will be held in 2015 to mark the 60th anniversary of the Messina Conference that took place in June 1955. After the failure of the European Defence Community (EDC) in 1954, the Messina Conference was a turning point in the revival of the European integration process. The main aim of the project is to help raise awareness of the importance of this major event in the light of current European issues.

Read the press release from the Italian Council of the European Movement (CIME) in French or in Italian.
Feedback