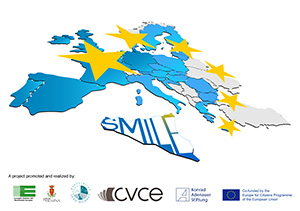 ‘60 years after Messina: giving a new impetus to Europe’

The Messina Conference, held from 1 to 3 June 1955, paved the way for the Rome Treaties in 1957. It was a key moment in contemporary European history which laid the ground for the European Communities. This conference prevented the failure of the European Defence Community (EDC) from disrupting the process of integration that had just been launched with the creation of the ECSC.

To mark the 60th anniversary of the Messina Conference, the CVCE and its partners in the SMILE European project are launching a competition to encourage young people to find out more about the past, present and future of the European integration process and to rediscover how Europe can meet their needs and expectations. Particular attention will be paid to the participants’ reflections on the potential to revive the European ideal and their recognition of Europe as a community of values and shared destiny. Projects submitted in the competition must be in multimedia format.

The SMILE project is organised by an international partnership led by the Italian Council of the European Movement (CIME) and composed of the town of Messina, the Konrad Adenauer Foundation (Germany), the Jean Monnet Association (France) and the Centre Virtuel de la Connaissance sur l’Europe — CVCE (Luxembourg). It is supported by the European Union’s ‘Europe for Citizens’ Programme.

Further information about the competition, including the rules and registration form, can be found at www.cvce.eu/project/smile/competition.
Feedback