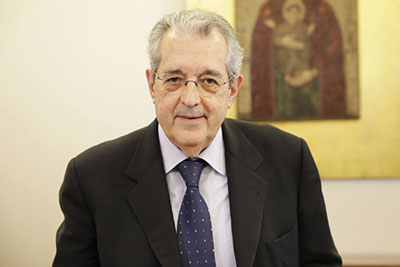 In connection with the ‘Pierre Werner and Europe’ research project and the ‘Oral history of European integration’ programme, Professor Fabrizio Saccomanni, former Italian Minister for the Economy and Finance and Honorary Director General of the Banca d’Italia, granted an interview to the CVCE on 19 April 2016.

Fabrizio Saccomanni is a Professor of Economics and Finance at the University of Rome and the London School of Economics and a leading expert on Economic and Monetary Union and the international monetary system.

During his many years at the Banca d’Italia, he played an active part in discussions on the single currency. He was closely involved in the preparation of the Delors Report and therefore had a key role in the negotiations on the Maastricht Treaty, the establishment of the European Monetary Institute and, subsequently, the implementation of European Central Bank policy in Italy. In 2012, he participated in the ECB’s working group on the establishment of the Single Supervisory Mechanism in connection with the plan for a banking union.

As Minister for the Economy and Finance, Professor Saccomanni was involved in the negotiations in the Ecofin Council for the creation of the second pillar of the banking union.

In his interview with the CVCE, Professor Saccomanni spoke about the origins of his European commitment, Italy’s role in the establishment of EMU, the current challenges and prospects for European banking union in light of the recent euro area crisis, and the reform of the IMS.
Feedback