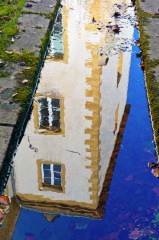 The CVCE carries out its activities in the prestigious setting of the Château de Sanem. This imposing monument, witness to several hundred years' history from its vantage point at the very heart of Europe, is now a centre for research into the European integration process and a hub for the processing and dissemination of information in an innovative digital environment. The hosting of new technologies in a historical château embodies the unique vision of the Centre, summed up in its slogan: knowing the past to build the future.

Most probably built in the early Middle Ages on the ruins of Roman fortifications, the Château de Sanem originally comprised a stone tower and various rooms for dwellings, all surrounded by a deep moat. This fortress, whose purpose was to contribute to the protection of the County of Luxembourg, was home to a succession of families from the region's nobility. The château stood firm through the centuries amidst the upheavals of history, experiencing periods of destruction, transformation and enlargement. It also endured the occupation of the French armies in the 16th century and the Polish armies in the 17th century. The building took on its current and final form in around the year 1700 before being acquired by the Tornaco family in 1753. The property remained in the hands of this family — which possessed a notably independent outlook and European perspective — until 1950, when it was sold to the town of Esch-sur-Alzette and was turned into an orphanage, the ‘Kannerschlass Foundation'.

In 1971, the château was listed as a historical monument. One year later, it passed into the hands of the Luxembourg Government. Now entirely renovated, the Château de Sanem is today home to the Centre Virtuel de la Connaissance sur l'Europe (CVCE). It is a working environment that is perfectly suited to the CVCE's research and outreach activities. It also offers a prestigious setting that is ideal for organising meetings and discussions with representatives from the world of academia and research, as well as with prominent European figures.