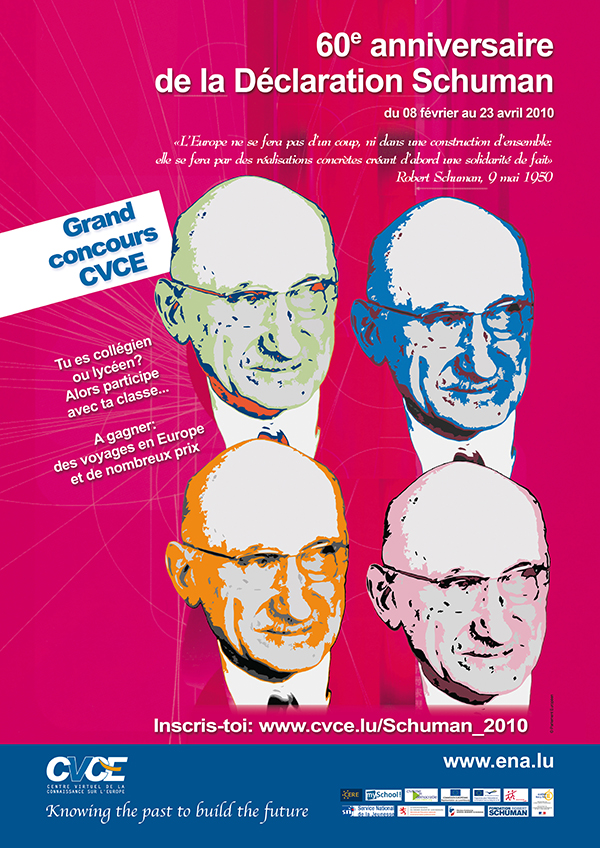 To celebrate the 60th anniversary of the declaration made by Robert Schuman on 9 May 1950, the CVCE organised a competition, which ran from 8 February to 23 April 2010, for secondary school classes in Luxembourg, Poland and France.

The pupils, with the help of their teachers, had to answer a series of questions online on the history of European integration, using the resources in the research corpus From the origins of the Schuman Plan to the ECSC Treaty (1950-1952), available at the site www.cvce.eu.

From 16 to 21 May 2010, the Centre Virtuel de la Connaissance sur l'Europe then invited the 130 competition winners from Luxembourg, Poland and France to take part in a study visit in Luxembourg.

Among the 3 300 participants, 6 winning classes were presented with awards at a prize-giving ceremony held on 17 May during the study visit. This visit was able to be arranged thanks to generous financial support from both the Robert Schuman Foundation in Paris and particularly from the European Commission as part of the ‘Youth in action' European programme, action 1.3: ‘Youth democracy projects'.

The educational aim of the exchange was to give younger generations a better understanding of the role and operation of the European institutions based on a general reflection around the ideals that inspired the ‘Father of Europe' in his declaration on 9 May 1950. The goal was to highlight the values of solidarity and respect between different peoples, values that have been a building block of European integration since the 1950s.

The study visit comprised educational workshops, a round table, debates with experts and European politicians, and educational activities including a tour of the European Parliament in Strasbourg on the invitation of Luxembourg MEP Charles Goerens and visits to the European Court of Justice and the house where Robert Schuman was born in Clausen, Luxembourg. The young people were therefore able to identify the common values and heritage on which European citizenship can be built. The aim of this study visit was also to explain what brings European people together, without losing sight of the diversity that characterises them.

In June, the Luxembourg winners from the Lycée Technique Mathias Adam and the Lycée Aline Mayrisch were given the opportunity to go on a trip to Poland and Warsaw for a week of cultural activities.